From my diary: “Yesterday we arrived in Jo’burg – or Johannesburg – and only at the airport I learned where we were going to stay: Holiday Inn Soweto. I had heard that name; I knew it had something to do with the suburbs. But I did not think we were going to stay in the middle of a poor area. Our first sight of the neighborhood was the chicken market. Live! We didn’t buy any and we didn’t risk walking around the neighborhood! “

When we arrived in Johannesburg, I heard we were going to be staying in Soweto. The famous neighborhood, I remembered hearing about Soweto in Africa. But I knew very little about it. And what a story the name carries! After our tour, I learned that the word Soweto comes from South West Township – and was created during the apartheid. Black people were forced to live outside Johannesburg and were sent to districts where they lived in precarious conditions, such as Soweto. Protests against the racist regime were held in the area, and several people died. In a church, I remember the guide asking Kareem if he wanted to go to the confessional. The Canadian remained unanswered, and the guide continued: “Not yet ready’ is the best answer you can give if someone asks you if you wish to go to the confessionary.”

Today Soweto is a culture-rich neighborhood, and the houses show better conditions than in the past – this is what our tour guide said, but my eyes saw lots of precariousness in this suburb. Even so, in 2007 there was a Holiday Inn there (I think now it’s the Soweto Hotel and Conference Center), giant and majestic, among chicken markets and extreme poverty. And I stayed there – we did so because we had a party to attend right at the Freedom Square – but I don’t recommend it. Nothing against Soweto, but it is an unsafe area for foreigners, plus it is far from everything.

Nonetheless, I definitely vouch for a visit, especially with a tour guide. All tourists should learn the history of the place, and how horrible the apartheid was. For that, don’t miss the Hector Pieterson Memorial & Museum – Hector was a 12-year-old student that was on a peaceful manifestation against apartheid education enforcement when he was shot dead by the police. The image of his body being carried became worldwide famous.

Combine your visit to the Soweto Art & Craft Fair for a chance to buy some exquisite art from talented local artisans. 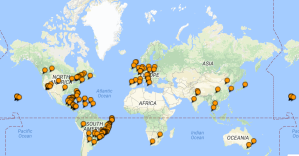